Back to France and Old Friends

Our next step from England was to return to France and stay at a friend's apartment on the ocean. I mean, who doesn't jump at a chance to stay with a view like this.
We knew our housesit ended on the 15th of March, so we planned to arrive in France on the 15th. This apartment near La Rochelle is so close to England, we figured it would be no trouble to get there in a day. What we didn't count on was that train travel would require us to go from London to Paris before returning to the coast, or to Lille, up near Belgium, before taking a train to the coast. All train possibilities looked to take 10 hours or so.
Our friends, Linda and Maurice, (originally blogging friends, now real-life friends) were waiting for us at their apartment and we needed to be there by 5 so they could catch a train home.
Finally, we landed on flying from London to Nantes, visiting French friends there and renting a car to drive to La Rochelle.
We have been friends with Michel and Danuta for more than 30 years. I met them when I came to France as an au pair and they had two little girls with a third child on the way. We try to see them whenever we visit France and they have hosted us and all of our children a number of times.
We talked about meeting for lunch and Danuta suggested a restaurant with a panoramic view of the chateau and the cathedral of Nantes. I knew immediately that she meant her beautiful apartment. 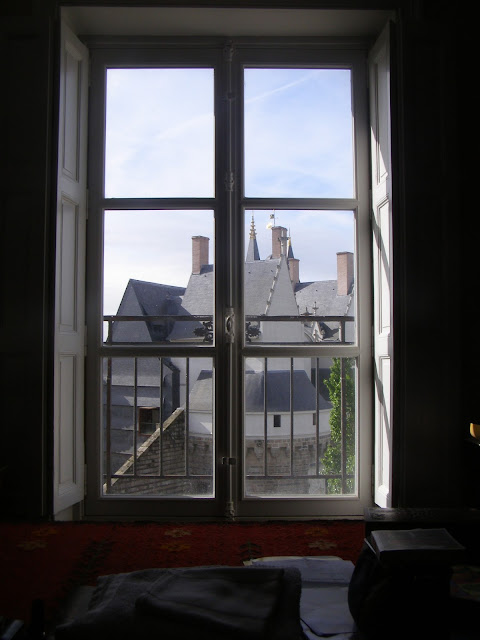 Our flight was at 7:20 a.m., but the taxi got lost on his way to pick us up. When we hurried through customs and to the gate, the flight was already boarding. No problem, though. We made it -- just no time for coffee or breakfast beforehand.
We picked up our rental car at the airport, without a GPS, making wrong turns into the city and ending up on a road where average people are not allowed to drive. Oops! We kept aiming for the cathedral because we know it's near their apartment. Finally, we arrived at the blocked road and Michel came out to push the magic buttons to let us in.
After parking the car, we agreed to walk around Nantes, since there was time before lunch. And a walk with Michel is serious business.

We started with the ramparts around the castle then moved toward the botanical gardens, Les Jardins des Plantes,

before pacing along the stretch that houses a fair twice a year, and perusing the river that ends abruptly in the city because it was filled in, but with a peek at the tunnel built under the road that allows boats access. After nearly an hour and a half, we headed to the apartment where Danuta was busy preparing lunch.
We met new friends, Hugo and Marie-Claire and they indulged us by speaking English and talking about books and blogs and retirement.
We had a glass of muscato in the salon along with olives, tomatoes, and bruschetta before moving to the table for a salad that included seafood, mushrooms and avocados. The main course was a dorade royale, which is a kind of bream. Danuta pointed out the line along the fish's head like a crown, which was why it is called royal. She first served him whole on the plate then retrieved it to the kitchen for filleting. All I could see was his tiny baby teeth, but I still ate some of the flaky white meat with butter and lemon sauce. As Midwesterners, we are bad at adapting to seafood. Michel explained that the knife beside our plate, which resembled a butter knife, was used for gliding across the fillet to help remove bones. The regular knife at the top of the plate, was saved for the cheese course. Plus, Hugo and Marie-Claire explained, using a regular knife to cut into fish would cause it to turn dark and oxidize, but maybe that was only with real silver. Along with the fish, was spinach fresh from the market, roast potatoes, and fennel (which we'd never eaten but sliced and cooked so it looked like onions). I had only a small glass of wine, knowing we were driving two hours afterward, but Earl had no qualms about refilling his glass many times over. We had cheese then cheese cake before moving back to the salon for coffee (for me) and plum wine digestif for Earl, two or three thimbles full, I didn't keep track.
All too soon, we had to leave to get to the beach by the appointed time and Earl promptly fell asleep. I turned on a podcast of Wait Wait Don't Tell Me to keep me company as I made my way out of Nantes and onto the highway headed south toward Bordeaux before veering toward La Rochelle and then south of there to Chatelaillon-Plage. It is gorgeous here, even as the clouds skitter past and drop rain on us before being replaced by sunshine.

Linda and Maurice were waiting and they showed us all the secrets to staying at their beautiful beach house. We'll meet them in Paris for a drink and to return the keys.
And we'll see Danuta and Michel again in Paris too where we'll create another dinner at their daughter's apartment in Paris. It's nice to be close enough to see friends repeatedly without worrying that it might be years before we get together again.
Friends is one of the things I have missed most while we've traveled for two and a half months now. I can't replace my friends at home with ones here, just like when I was home, I couldn't replace these French friends, but it's nice to have so many in my life.
That includes my friend Najah who flies to Paris, for the first time this weekend, arriving Monday. We'll be there to greet her at the airport and show her a bit of Paris before retreating to Aix en Provence for five weeks.
Friends and France -- that makes me very happy.
at March 16, 2018

I can already see a french smile on your face! we never replace friends - we just expand on them and there is always room for more.

A wonderful story and fabulous friends. Such brilliant connections you have Paulita And French or France connections . Many in Paris.

As the song says, "Make new friends, but keep the old. One is silver and the other gold."
Glad you're having such a good time!

Wonderful I hope to visit one day! I'm happy you are living your dream.

Sounds like you had a good time. No Sat-Nav - I cannot read maps anymore I would have probably ended up back where I had come from!!!!! Enjoy the weekend Diane

Bonjour Paulita ! Welcome back to France! Seeing your big smile it seems you are more and more happy to live your new life here. Great to be able to live your dream as planned so many years ago.I noticed that you are very close to Susan Hays from " ourfrenchoasis "as you are staying in La Rochelle for a few days.May be another new friends to meet ans so feeling like home in France.