Our friend Najah had to fly back to Ohio on Wednesday. Her flight left Paris at noon, so we decided that at 6:30 a.m. train that reached the airport at 10:02 was the best option, rather than her taking the train to Paris the night before her flight left.
We had planned to leave the apartment at 5:30 a.m. to get there by 6 and get loaded onto the train with her luggage.
My alarm went off at 5:05. I skipped putting in my contacts and opted for glasses since I planned to return to bed when we got home at 6:30. I even contemplated leaving my pajama shirt on and just putting a sweater over it, but at the last minute I decided to get fully dressed and brushed my teeth. My hair was still braided on the side from the day before when the wind along the Mediterranean started whipping it. 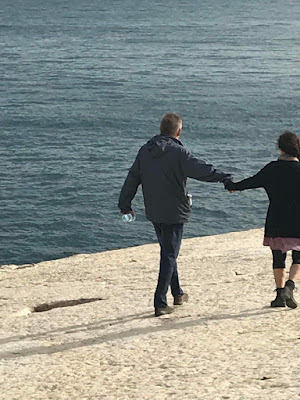 Of course, the braid was looser and a little sloppy, but I would be home in bed again soon.
We waited in the enclosed room, and checked the train numbers in time to know that the train on the quai was not the right one for Najah. The next one arrived 10 minutes later. The doors slid open.
"I'll say goodbye here," I said hugging Naj.
"No come with me," she said, so I went aboard to help her find her seat while Earl carried her suitcase up the steps and placed it on the luggage rack.
Hugs goodbye and we turned to leave as an announcement was being made. I didn't focus on the announcement, but the man in front of me was moving to the opposite side of the aisle and his bag got caught on the armrest of the chair and blocked the aisle.
I smiled, one of those tight-lipped smiles that says I'm impatient, as he unhooked the bag and we continued on. We descended the interior stairs and I saw that the door to the platform was closed.
I didn't panic, merely pushed the black button to open the door, but it didn't open and at that moment the train began to move. That's when my heart started to beat frantically.
"The train's moving!" I said to Earl, in the most obvious statement ever that didn't need to be said.
We glanced at the little red hammer at the top of the door. It wasn't an emergency though. We were stuck on the train.
I took a minute to calm myself, to talk myself down from the panic rising in my chest.
We didn't have a job that we'd be late for. We hadn't left the doors unlocked or the tea kettle boiling. We had no children at home alone and had let the cat outside before we left.
We might be taking the train to Paris and back, but the only thing to worry about was the time and the money.
We walked back up the stairs to the top floor of the train and Naj looked up.
"What happened?"
"We couldn't get off," I said.
"We thought you could use some company," Earl said. 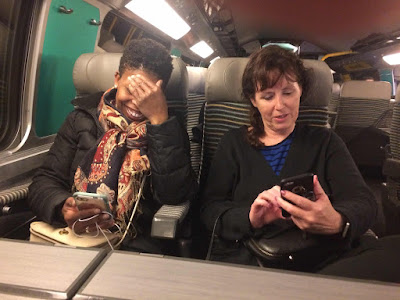 And so we sat down with Naj and felt the sway of the train. I made Najah rebraid my hair so it wasn't quite so messy. Earl fell promptly to sleep. We looked at Najah's ticket trying to figure out if the train would stop anywhere before Paris.
It's a high-speed train, a TGV. It would normally take about 8 hours to drive from Aix en Provence to Paris, but the train covers it in 3 and a half hours. Wherever we were going, we were headed there fast.
I checked out the train app trying to see if we could buy tickets while on the train or at least find a return trip, but the WiFi wasn't working.
I walked down to the dining car to ask who we could talk to, but they weren't open yet. I had no idea where a conductor was but knew that eventually they would be coming along to check out tickets and we wouldn't have them
As Earl slept, I analyzed my continuing anxiety. The truth was, I hated anticipating that moment when the conductor would arrive and I would have to explain that we were accidentally on the train and we had no tickets. And I'd need to do it in a foreign language.
My friend Delana had advised before to just speak in English and pretend like I didn't understand what the train conductor said. I know that my daughter once fell asleep on a French train and her tears ended up with a hand-written note to let her get the next train back. I didn't think I could fake not understanding the problem, and I'm not one for crying on cue.
After nearly an hour, a familiar tone sounded and the announcer said we were arriving at Valence.
We'd never heard of Valence, but we were grateful to hop off the train at any place farther south than Paris. We gave Najah more hugs and waited anxiously by the door.
At the ticket machine, we bought return tickets for 68 Euros total. We could have tracked down a train official and told him/her our story of woe, but I feared that we would have to pay for the trip to Valence and back, plus a fine, so we opted to simply buy a return ticket.
With an hour train ride back, and only one stop in Avignon, now I could worry about what might have happened to the car. We pulled into the parking lot and parked in the very front spot for what should have been 45 minutes of free parking. I hoped I hadn't missed a sign about cars being towed after a certain amount of time.
When we exited the train at 9:30, after our three-hour unplanned trip, we found the car there and had to pay 14 Euros to exit the lot. So for 82 Euros, about $100, we had an unintentional train ride to nowhere and back.
We didn't go back to bed when we got home at 10 a.m., but we spent a bit of time decompressing from the stress, and we learned a good lesson about staying on the platform to wave goodbye to friends when they leave.
at March 30, 2018

Email ThisBlogThis!Share to TwitterShare to FacebookShare to Pinterest
Labels: Aix en Provence, French trains, getting caught on the train when it leaves, stuck on a French train, TGV, traveling by train in France, Valence, waving goodbye from the platform

Oh, my, you are having such adventures!
Yes, the trains stay only 2-3 minutes at the station, so don't get on unless you plan to stay!
At least your friend got off OK, right?

And aren't you glad you decided to brush your teeth!