If this was a vacation, it would be the longest I have ever taken. But it isn't. It's my new life, and we have been in France for a month now. I figured I'd better take stock.

Honeymoon Period
We arrived in Paris with three days in a  hotel, included with our airfare because it's cheaper that way. The weather wasn't sunny, but it was so much warmer than at home where temperatures plunged below zero (fahrenheit), below -17 (celcius). So we wandered through the Louvre, visited markets and reveled in a wine and cheese tasting before we eagerly moved to our first housesit.
Hovel
We eagerly arrived at our first housesit through Trusted Housesitters. We knew it might be a lot of work, what with three dogs, five cats, a donkey, a mule and two chickens, but we were not prepared for the filthy condition of the house, including fly strips covered with hundreds of flies. At least replace them with new ones when someone is coming to housesit for a week. The homeowners were lovely, but it must be nearly impossible to keep a house clean with that many pets. 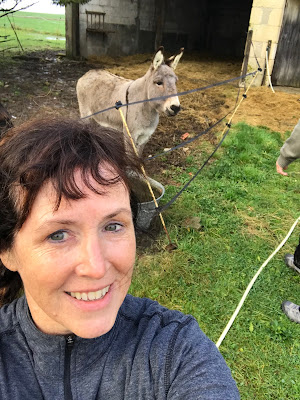 Earl and I uneasily ate dinner with them that night, ratatouille and leg of lamb, and retreated to the upstairs, which was pet free, but freezing, as in, no heat whatsoever. We quickly undressed and slid between the covers. We were plenty warm in bed. 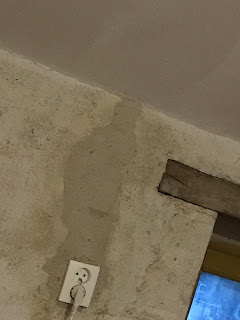 A cleaning lady came the next day and we wished her good luck, but truthfully, she couldn't make a dent in the filth. The homeowner explained that she had chastised the housecleaner for getting rid of the cobwebs, big thick ropy cobwebs like those you'd find in haunted houses because they help cut down on the flies. I'm not sure which I would prefer to live with -- neither.
I later found the container that our dinner ratatouille had been stored in, marked for the freezer "ratatouille August 2014," and I gagged a bit, thinking it was 3 1/2 years old. We couldn't bring ourselves to eat in the house so we would take care of the animals and then leave for a  nice lunch, letting the one meal suffice for the day.
The smell of the house was the thing that probably kept us from eating there -- a kitty pan in every room. The overwhelming smell of dirty dogs along with animal waste.
Earl got sick first, congestion, coughing. I'd lie awake at night and listen to him breath, praying it didn't go into his chest, which he was prone to. His colds frequently turned to bronchitis. But he seemed to be recovering just as I came down with a headache and shivers. I retreated to the cold bedroom at 6 p.m. one day and imagined that I saw an image of Jesus in the shadowing on the wall. My friend Noreen convinced me it  looked more like a backpacker on the Appalachian Trail.
I might have started with the flu, but I ended up with a cold and then probably bronchitis.
On the drive from our housesit to Aix en Provence, I would sneeze so hard and so many times in a row that I'd end up having muscle spasms in my stomach.

Homesick and Unhealthy
Walking into Delana's apartment in Aix en Provence was such a relief. To be in a clean apartment with an American friend. I wanted to sob. But even there, I continued to be sick, coughing through the night with hallucinations of ridding my chest of the congestion that threatened to drown me. I consulted the internet each day wondering if I needed to go to the dr, but the advice suggested that I suffered from a virus and a doctor could do nothing for me.

We accomplished one or two things each day before I would retreat to bed again, wishing I was home in Ohio, in my own bed in a house that I didn’t own anymore.
When we set off for our next housesit, driving across the country again, I wasn’t at all sure that I wanted to live in France for the next month, much less the next year or entire retirement.

Healing
My cough had minimized when we arrived in Chateauneuf sur Charente, driving through the black night on Thursday my roads searching for an address that didn’t show up on our GPS.  When we pulled up, Norman stood outside the door to greet us. The two dogs with wagging tails and a dinner of noodles and bolognaise sauce made the welcome complete. Caroline showed us to our bedroom suite upstairs. Earl and I exchanged looks of relief.
Our days here are made up of sleeping in until 8 most days. We get up, feed the cats and dogs, make breakfast, walk the dogs for 45 minutes or so, shower and then decide what to do for the day. We've walked through mud up to our ankles, slogged through floods up to our knees, seen beautiful swans and herons, and eaten delectable meals.
Slowly, I recovered from cough until this week I was able to run again. Four miles on Monday. Five miles on Wednesday. Today I ran three miles with one of the dogs. 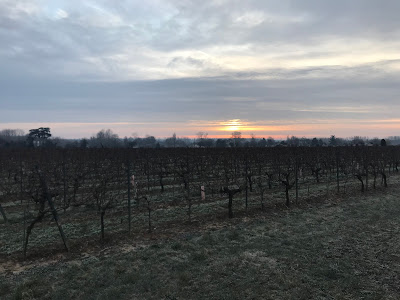 We've visited a castle, roman ruins, Bordeaux and explored Cognac until we feel like inhabitants. Today we went to a computer repair shop, stopped at a clothing store to buy Earl a hat, had coffee twice at a little restaurant, and got Earl his first French haircut. 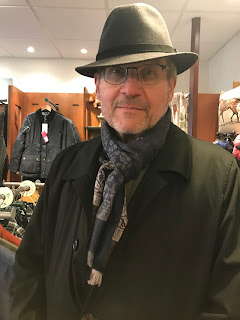 In the evenings, most of the time, we're home. If we were within walking distance of a village, we might go out to dinner or to a concert or a movie. Instead, we hunker down at home in the very dark countryside, keep a fire going and watch Netflix. We've been watching The Outlander series, which I love, in spite of having to fast forward some of the cruel parts.

Moving On
On Sunday, we'll move on. We have two weeks to ourselves, no housesits, no pets. I worry that we might not get out of bed on some mornings.
We plan to look at apartments and look at houses, trying to decide where we want to live from May through the end of the year.
And right now, I can tell you that I'm feeling pretty at home in France and enjoying most of my minutes here.

Excellent summary of your first month. It just keeps getting better!

Excellent thought to post a summary for new readers who may have joined you on your adventure. I look forward to month 2.

I do hope you wrote to Trusted House sitters and told them of the state of the house ...sounds horrendous ,,so happy you moved on to a cleaner house xx

Francetaste, Thanks. Yes, we're definitely on an upswing. I'll take it!
Emily, Thanks for coming along.
Anne, We haven't figured out how to notify Trusted Housesitters without endangering ourselves. If we say bad things about them, they can post a bad review about us. But we know they are having more housesitters in March and they are from Columbus, Ohio, the same place as us. I wish we could warn them. What would you do?

I'm glad to see that last photo and read that last sentence! Starting to feel at home in France. I'm glad you've stuck it out. Hopefully in the next two weeks you'll find a spot where you'll want to settle.

Want To Boost Your ClickBank Traffic And Commissions?