My husband fell a little bit in love with Cognac last week -- the city,  not the drink.
We had been to Cognac before after visiting some Roman ruins, we went in search of lunch and ended up at a circle in the Centre Ville of Cognac. 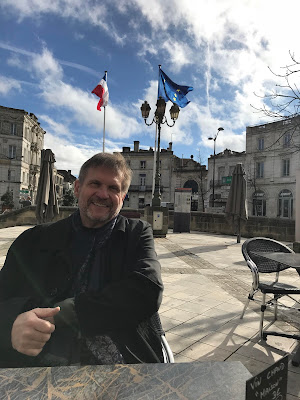 The weather was warm enough to eat outside and I snapped a picture of Earl with the French flag flapping behind him, but then we headed home without further exploring.
We returned to Cognac on Thursday with a specific restaurant in mind that we had found online, but as we followed the GPS, it took us past the restaurant and we ended up along the river. We parked and began to walk in the sparkling sunshine. 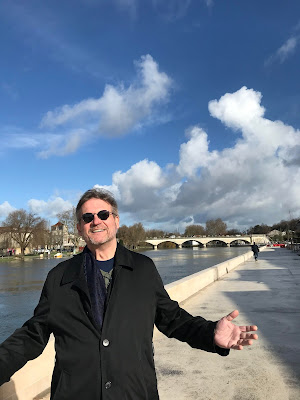 The sunshine makes a huge difference in how much we enjoy a place. As we walked along, we passed the Hennessy cognac house, its red flag whipping in the breeze. 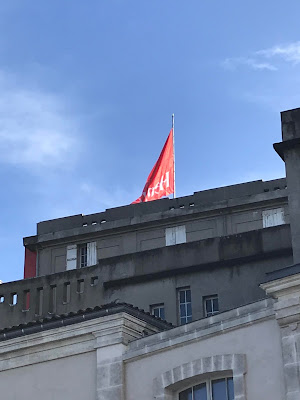 And we passed the towers that were once the entrance to Cognac known as Porte Saint-Jacques and were built in the 15th century. 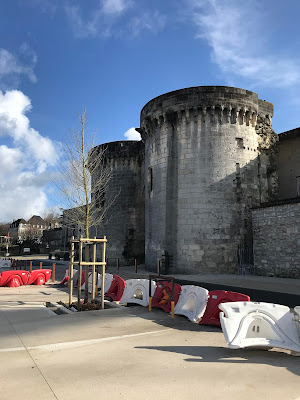 The barriers in the photo were meant to keep us away from the river walk, which they were redoing, but we wanted to walk along the river, so we ignored them.
We made our way to an Italian restaurant called La Scala, and the interior was probably an homage to the opera. While eating, I discovered something delicious. It's an aperitif, a pre-dinner drink, called Pineau. Pineau apparently is made from the grape must that is not used for Cognac. Apparently there's a limit to the amount of Cognac they are allowed to make, so with the leftover, they make Pineau. It's not a wine, exactly, more like a wine liqueur. If you've ever had Port, or Porto as they call it here in France, it's very similar. Stronger than regular wine. The choices for the Pineau were white or rosé and I went with rosé. Yum 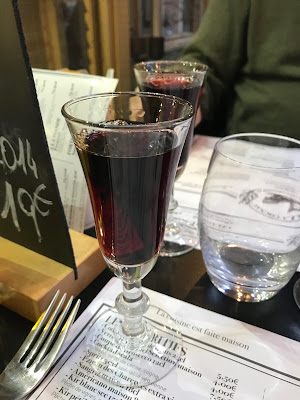 We enjoyed the Pineau so much, that we bought a bottle at the store so we can have the aperitif at home.
Afterward, we went wandering around the town in a happy Pineau-fog, and we just found more and more to delight us. The winter sales are still on, so the shop windows are full of tempting clothes and boots.
We stopped in a magazine store and bought a New York Times to read later and Earl's brilliant idea to search for a pencil sharpener there bore fruit. I'd been searching in the makeup section for a sharpener and was unable to find one, but a plain old pencil sharpener was easier to get my hands on.
The piéce de resistance of Cognac was stumbling upon a Jeff de Bruge candy shop. Yes, we entered and bought a box of chocolates. We debated briefly if we should send candy to our children for Valentine's but then decided that they would miss it more at Easter if we didn't send candy then. So we'll splurge on chocolates for them then. They can celebrate Valentine's with their own special someone.
We returned to Cognac, about a 20-minute drive from where we are staying, again on Saturday to see the market in Les Halles, a covered market for the winter time.
This time, we made it to the creperie was had planned to visit, since it was the day after Chandeleur, or Candlemas, and the French eat crepes for Chandeleur. We had galettes, savory crepes, and followed up with sweet crepes for dessert.
Again, we wandered around town, and this time we found some ancient buildings, like this 15th century half-timbered building with carvings in the wood. 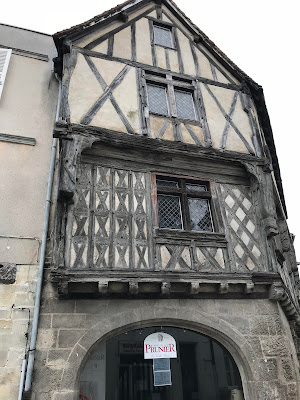 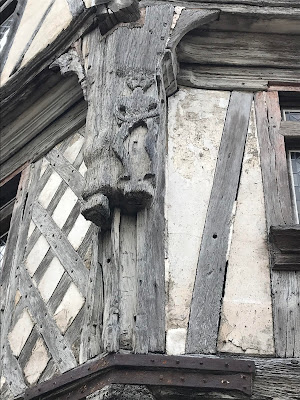 Known as the Maison de la Lieutenance, it has lots of carvings in the wood and I wonder how it has survived the elements all these years, although they are quite worn away. The plague on the house says this wood carving has "two human figures (one upright and the other upside-down). Not sure I see it.
But every walk in this town reveals more intriguing shops and photo-worthy architecture. 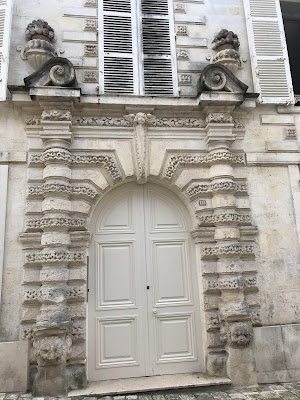 I'm sure we'll go back again before the end of our housesit, if  not for a good restaurant meal, then at least for another box of chocolates since the dog jumped up on the table and stole the last piece this morning (he's fine).
If you go, I recommend wandering away from the main square to find a meal that is worth the walk, along with some beautiful buildings.

A friend from Belgium moved to Cognac several years ago and loves it.
You will be happy to know that Jeff de Bruges has more than 500 stores around the world, including one in Carcassonne....
Jeff actually is named Philippe (Jambon is his last name! Ham!!!) and is French. But the chocolates are great. And the salty caramel ice cream!!!!!!
There are lots of liqueurs made from wine leftovers. They're often lumped together as "marc" (pronounced mar) or eau de vie (water of life!), but local versions have their own names.

Francetaste, Thanks. You always have interesting tidbits to add to the few pieces of knowledge that I have.

Ripe cantaloupe melon balls or slices marinated in pineau make a fantastic chilled summer dessert, but you'll have to wait until summer to try that one! Thanks for the interesting walk around Cognac.

That is CLEARLY the face of a very happy man! And I think you were pretty happy too. It looks like a fascinating town and I'm glad you got to explore it. Who knows? Maybe home sweet home someday?

Kiwi, That sounds delicious. I'll definitely try it.
Jeanie, Yes, it's nice to be hitting our stride with the life we had dreamed of.

Ha! It just occurred to me that KIWI marinated in pineau could be good too.
That sunshine looks deliciious, the town a real treasure, and as has been noted, you both look very happy! I'll stop by Earl's blog and say hello too.
So glad to see you in such good spirits.

Sim, Thanks for dropping by at both my blog and Earl's. And thanks for the advice on the photos.