Maybe it was leaving behind the comfort of the mountains in Quillan, perhaps, having seen a comfortable house and imagining myself living there through the end of the year, but something made me a bit resentful as we drove the two hours to Pezenas and pulled in yesterday.
It wasn't the beautiful accommodations with the stone staircase, smelling slightly damp, that curves around to the spacious apartment, 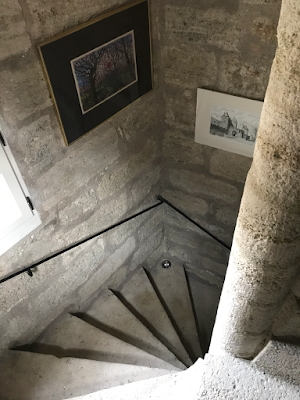 or the gracious hostess who met us at the historic edge of the town and pushed the button for the roadblocks to descend so that we could wind through narrow cobblestone streets. We parked in front of her garage door as she assured us that she would be able to negotiate her Harley Davidson around the car.
We unpacked and spent a bit of time in the apartment, Earl flipping through some Olympic coverage which we hadn't been able to find any place else. Then we went walking.
With my stomach still full from a lunch at a restaurant along the route, I wasn't temped by the patisseries, the boulangeries, the salons de thé, or the many restaurants. And, although we stopped to lèche-vitrines (window shop, but it literally means lick the windows) at many immobiliers, I dreaded trying to negotiate in French-English with the real estate agents and schlepping to look at apartments that don't come with kitchens (if you've watched House Hunters International you realize this, but we aren't committed to buying a kitchen when we don't have a house yet).
Instead, I picture that house in Quillan with the wood beams across the living room ceiling and the veranda outside the kitchen, sun from three sides and a nice stone patio where we could sit in the summer to catch the breeze blowing down from the mountains. 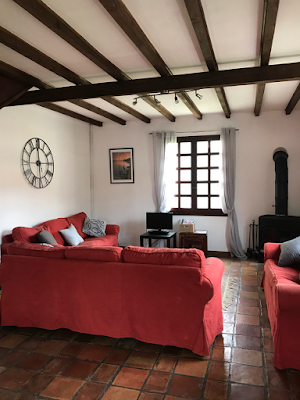 I felt resentful.
Was there nothing to do here but eat and buy property? I wondered.
We passed a theater where a crowd had gathered, but we'd been to see a movie in English with French subtitles the night before.
We hoped we were close enough to the Mediterranean Sea to ride bikes there, but all the bicycle places we looked up didn't open until tourist season.
As we climbed the hill back toward our apartment, we passed Rue du Chateau, and there was the old gate to the chateau, pretty much all that is left.

The plaque by the arched door explained that the site was first built by the Celts in 497 "avant J-C" before Jesus' time. Then it was a fortress of Julius Cesar before a retreat for kings Louis VIII & IX. It finally became the home of  the Constable de Montmorency in 1555 and was destroyed in 1655 by the order of Richlieu who sussed out everything remotely anti-Catholic.
Richlieu was an ancestor of mine. One of his daughters became a Hugenot and fled France and that's the line that I come from.
I guess I come from a long line of people trying to inflict their own religious beliefs to others.
We spent the evening in reading books since the WiFi connection wasn't strong enough to stream Netflix, and my unease with the city grew.
I kept thinking, "I'm not living my best life."
Maybe it has to do with the amount of time I have to do whatever I want -- or nothing. If I was home in Ohio, I'd be teaching six classes. Right now, I only have one.
Again, I felt my dream drifting away from me. Had I been wrong to give up everything and come to France?
I always thought I was the adventurous type, but now I dreaded going to talk to real estate agents.
This morning, I messaged a friend who holds my secrets close and told her about my fears. Then I circled down the stone staircase and let my feet explore Pezenas.
After a five-mile run augmented by uplifting music, I walked toward the old city. I paused to read a plaque on a building and noticed that it was a bakery with no customers inside, a perfect opportunity for me since I didn't want to offend people with my sweatiness.
I ducked inside and bought croissants for our breakfast. The woman inside commented - in a friendly way - on my run, my "sportif" activities, and I smiled and agreed that it allowed me to eat more.
We both laughed and I continued on my way, following the map to our stone apartment where my husband awaited to let me in the locked doors, living a life that I had chosen, promising to make my dreams come true
at February 20, 2018

Sorry, just stumbled into your site - looks like you're at the start of an adventure! Wherever you are, it looks and sounds wonderful.

This is like when you start a new sport (running?) and you are using new muscles and at first they hurt like crazy. Eventually they get strong and you feel almost invincible.
You can get a used bike on leboncoin.fr for around €60 or new for €130 from Decathlon.
We should talk. I looked at 80+ properties before finding our AirBnB rentals, and did most of it myself, without my husband. Some tips, some vocabulary. But you should be able to find some agents who speak English, at least enough that you can do a mix of French and English.
As for a kitchen, there's always Ikea.

Mike, Thanks for stopping by.
Francetaste, Yes, I know you're right, but you know how difficult it is in the middle of it. I'm emailing you.

Be sure you are getting plenty of sleep - you would be amazed at how that helps have a brighter outlook and a more balanced view of coping to realize your dreams. You are spending a lot of time out of your comfort zone and that is tiring. Be nice to yourself - you will find your way. And keep writing about your struggles - that helps too. You are on the right path.

Hello Paulita, Change is Hard and you have had a lot of them since selling your home in the USA .. You have moved right across the sea and as you say , you are maybe feeling that you should be doing something else, ie your teaching.

YOU WILL GET THERE!!

I used to love change , and to be honest I don't mind it when with someone but this is a HUGE change for me and buying on my own in a new town , ok still England but still new and I don't no anyone. Reason is that I cannot afford in Oxfordshire , so moved a little bit further out , but I can still get to Oxford, London and my sons. ♥ As the comment says from Sillygirl , being out of your comfort zone is tiring , and sleep is good for us so I hope you are sleeping ♥

You're right, Paulita, about change being hard. You've given up a lot to live this dream and maybe you need to spend some time (as you plan to) working out the kinks and seeing if in a year or whenever you decide that it's the dream you want or has just been an adventure. Until then, take the up days and the down as they come. Not every day at home was good, either. Sometimes, I'll bet you were bored. And don't forget, you've been sick for much of this time and that takes a lot out of us. One day at a time. The real estate agent will be there tomorrow and the next day. So will you.

I'm glad you are writing, though. Sometimes we just need to vent.

You're so right about change being hard. I'm in the middle of some big changes myself, and it's been more difficult than I expected.
I hope things start to get easier for you soon!