So, we are still in the countryside -- for four days so far -only four more nights to go, or as we’ve come to call it, the liberation. We leave for the train station on Sunday morning, and you might get the impression that I'm eager to leave. It's true.
The animals are very sweet, but like animals everywhere, they need a lot of care. 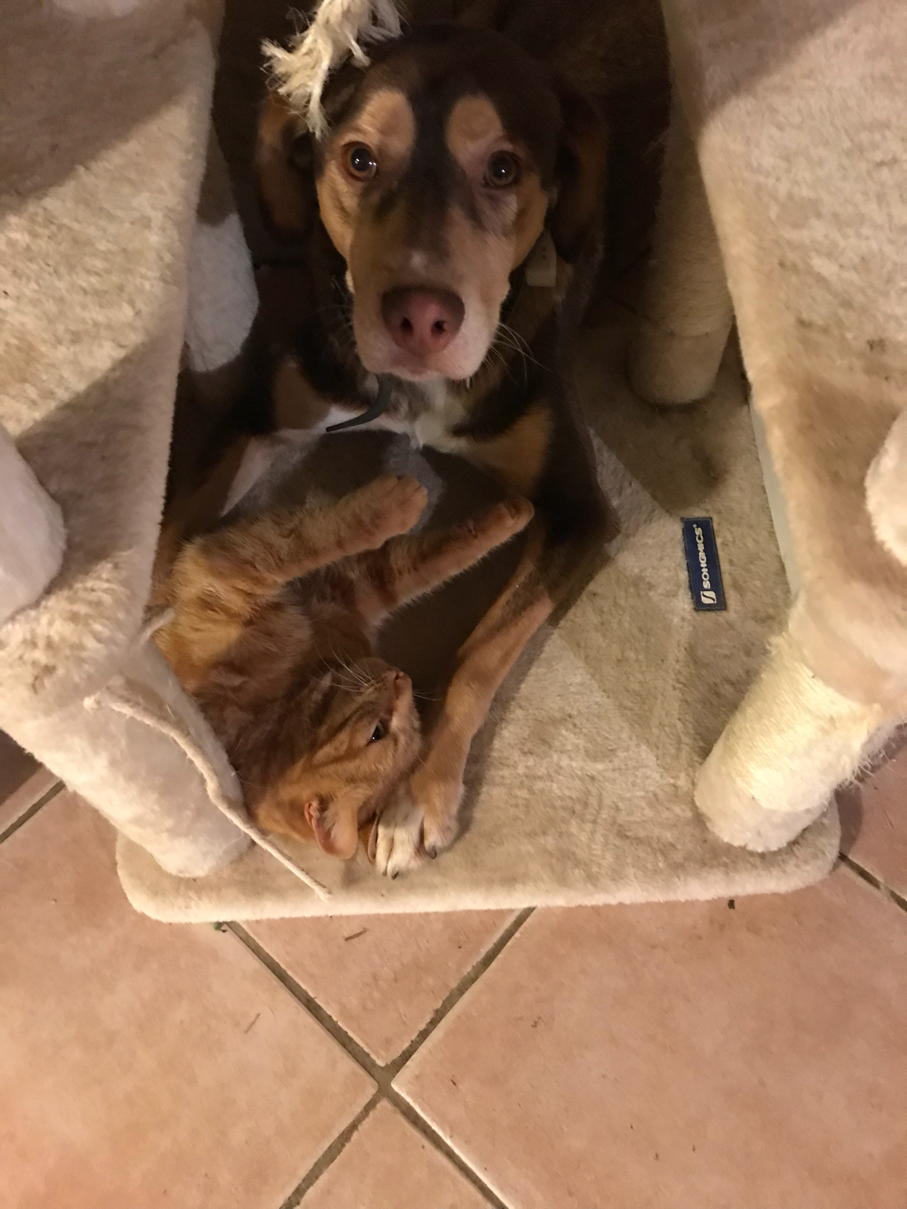 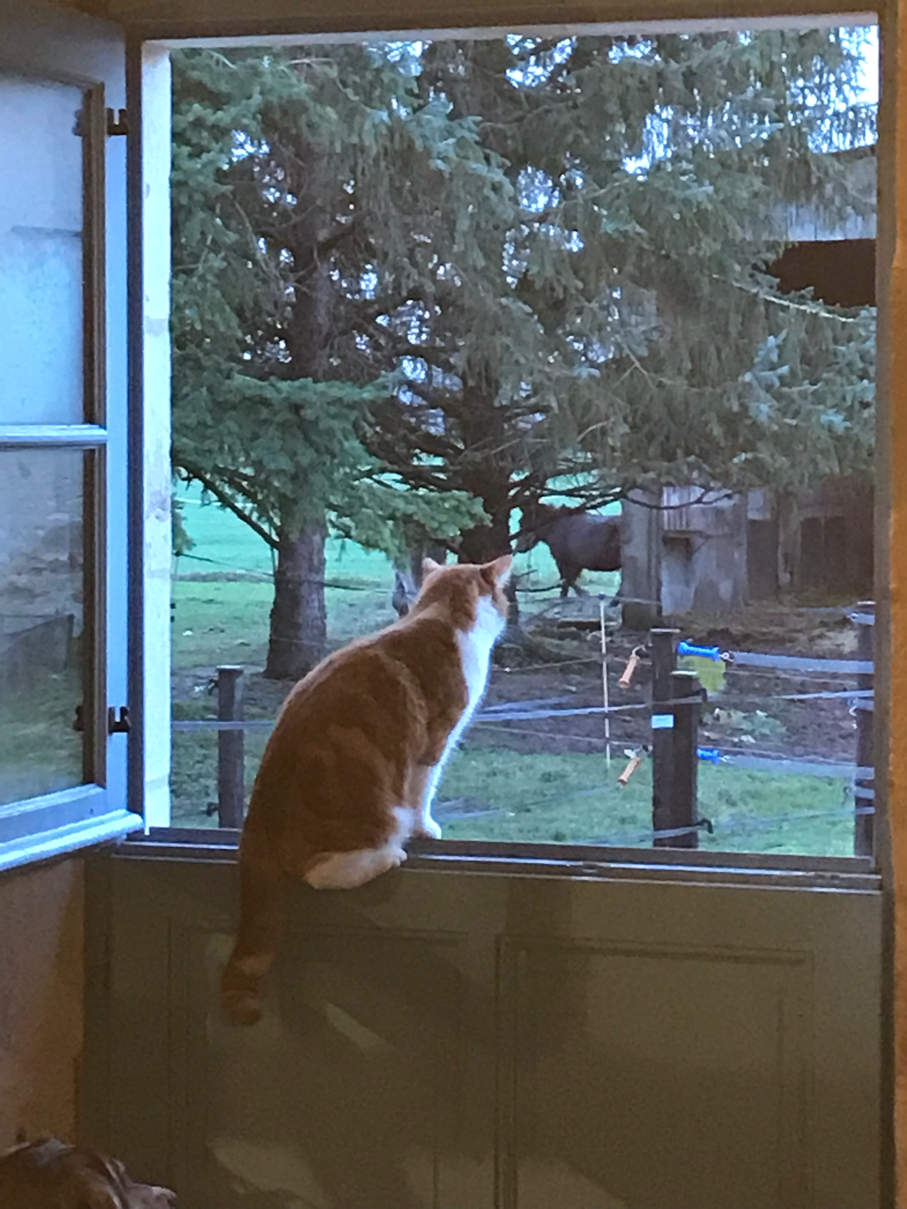 Marty tears apart his bed when we put him in his cage, which we do whenever we leave and overnight. Last night two of the cats were fighting for dominance, and pour Hopi, who was a rescue dog just a few weeks ago, refuses to let anyone walk behind her. She's so nervous it just breaks my heart. She seemed mush more self assured before her owners left her with us. She probably didn't need another change.
The older dog Tinker is sweet and ratty. After we go for a walk, he always has some sort of twigs embedded in the gray hair of his legs and I have to pull it out. Marty is rambunctious. I've run with him some, but at the beginning of our walks, he's jerking my shoulder and pulling the leash out of my hand.
I thought things would improve after the cleaner arrived and spent two hours cleaning the main room -- the kitchen, dining room, living room. 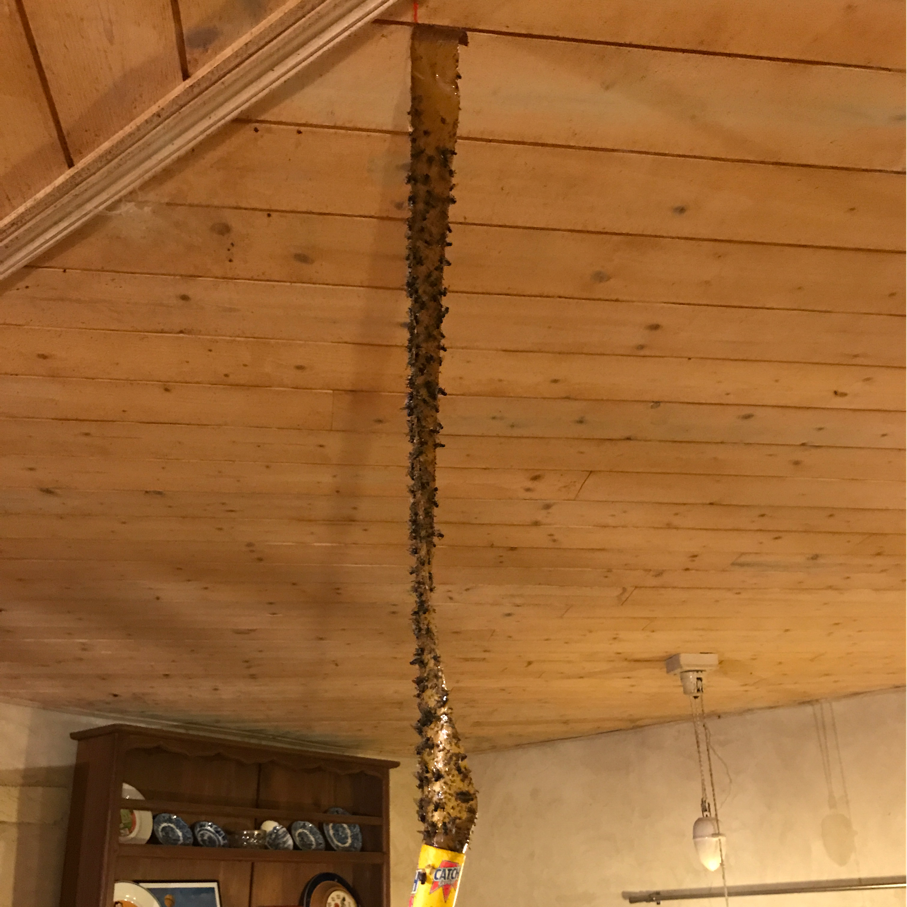 Now, I'm not sure what would make the room feel clean enough to eat in.
I have made coffee and drank that, but I haven't been able to bring myself to eat anything. So we go out for big lunches and let those tide us over for the entire day. So, yes, we have become typical retirees, eating one meal per day.
But those meals!
Yesterday we drove to Chauvingy, where there are five castles, many of them destroyed. 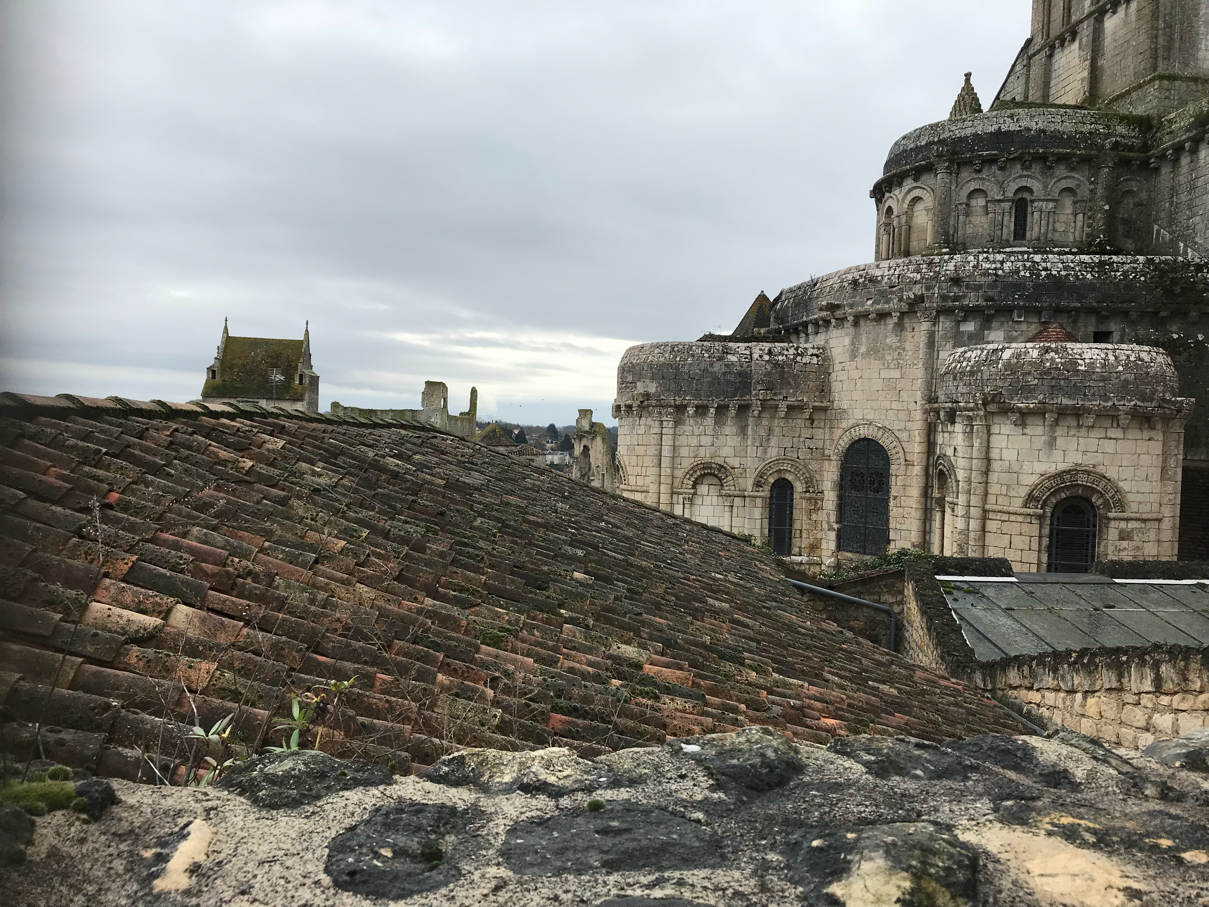 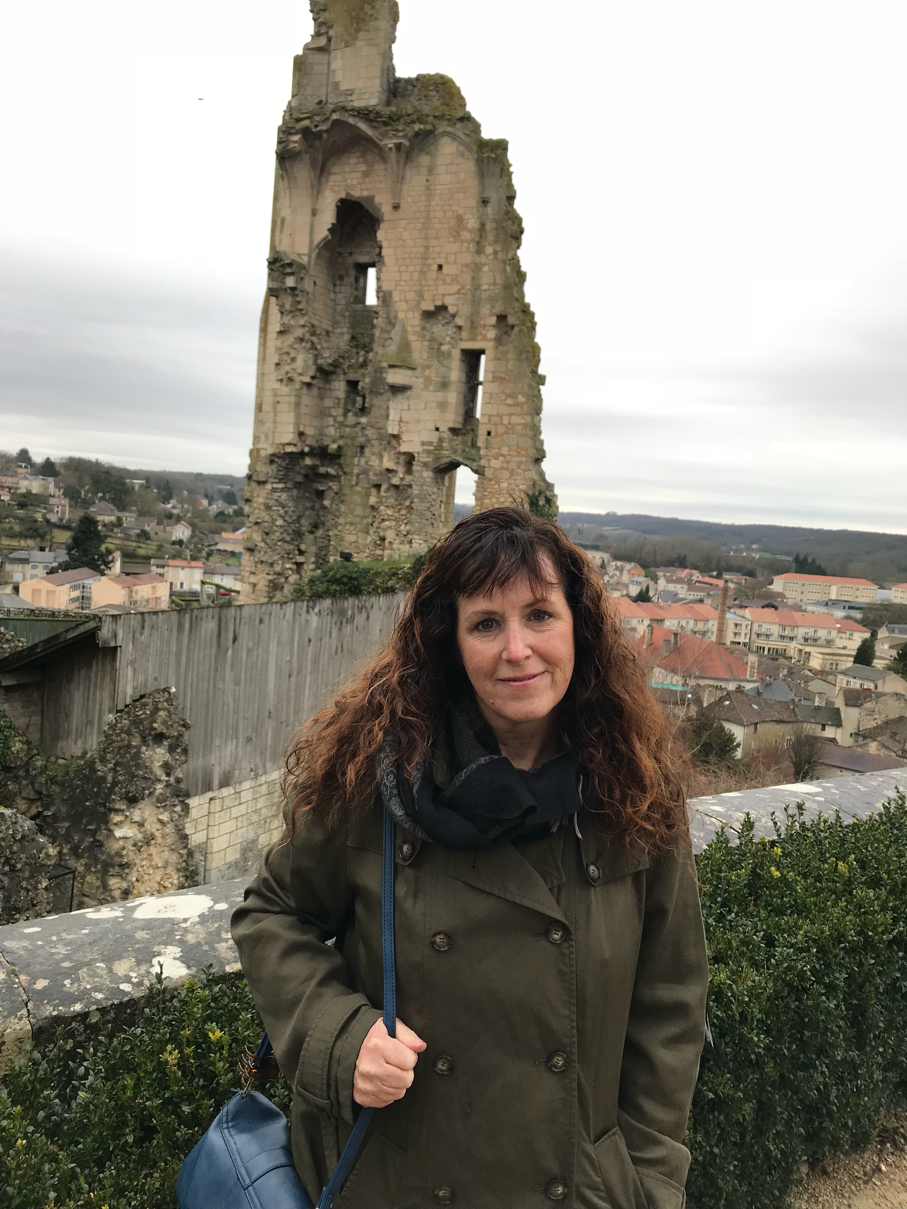 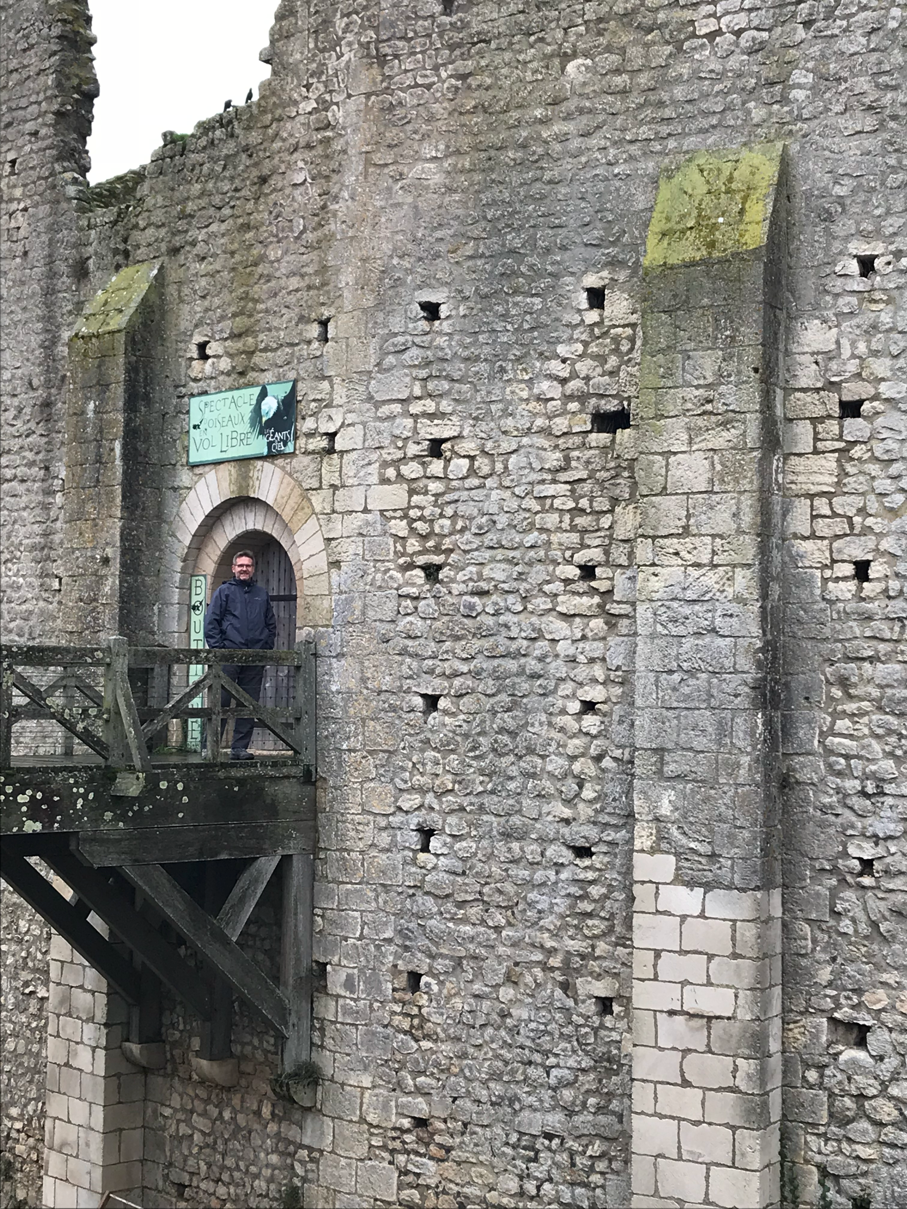 They're from medieval times, or as I said to Earl, built by middle aged peoples. It was raining some, but we walked around to look at the ruins.
"I would not want to live down hill from that," Earl said, pointing out the stones that jut toward the sky.
Most places, like the artisans studios, were closed since it was a Tuesday in January. But we managed to find a creperie where we had lunch. We began with drinks (aperitifs). I had a Kir traditional, which is cassis syrup and white wine. Earl has pastis, which is licorice flavored alcohol. It comes out clear, but when you add water it turns a milky color. He's been fighting allergies (wonder why) so the alcohol really cleared him out.
We both ordered crepes.  I had ham, cheese and egg crepe.
We followed that with a green salad with vinaigrette and then a dessert. I got the "cafe gourmand" which is a sampler of desserts along with a cup of espresso. 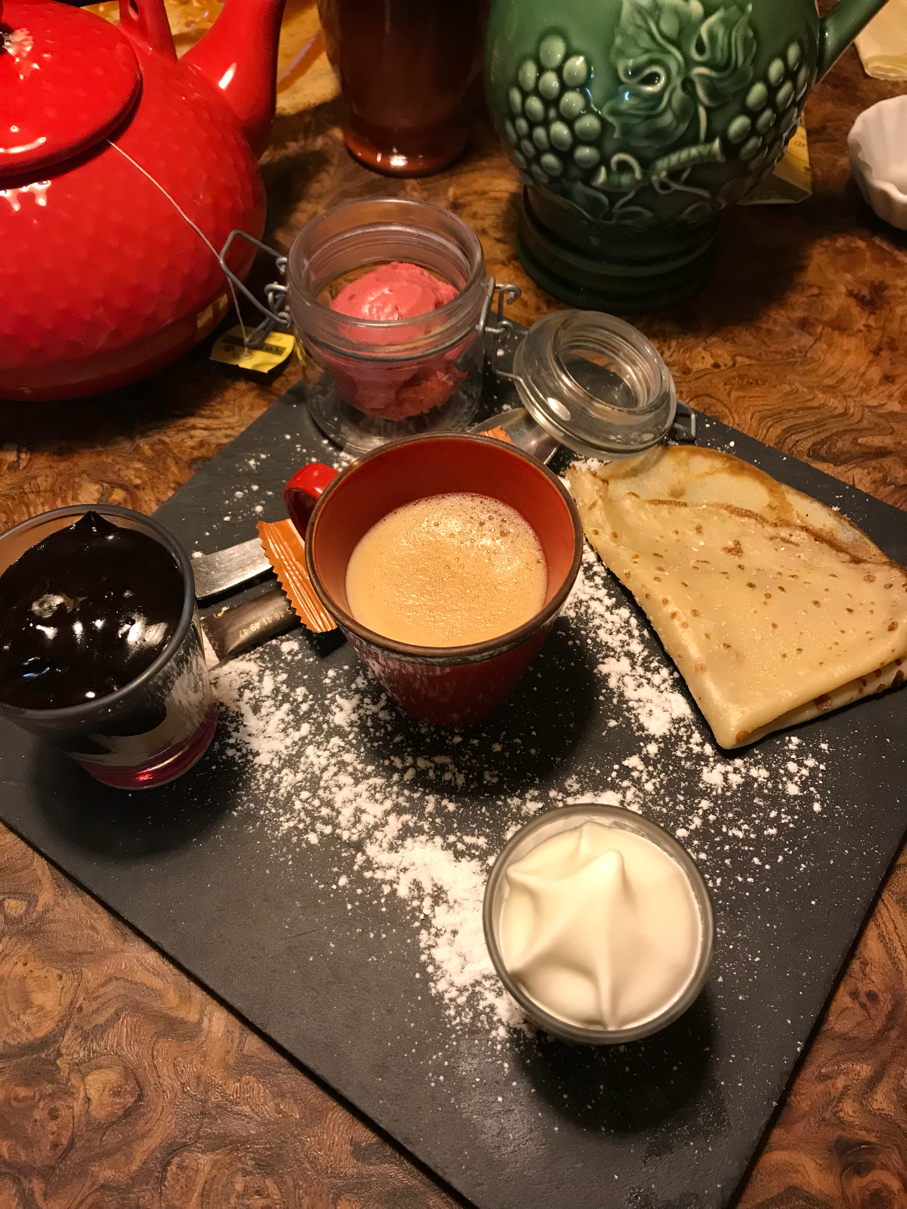 This one had a folded crepe, a scoop of raspberry sorbet then two little cups of hot fudge sauce with whipped cream (chantilly) and another of salted caramel sauce with whipped cream on top.
Yum!!!
One of my issues with the dirty house is that I'm not drinking enough water. I don't even want to drink out of the glasses from the cabinet, so this morning, we just walked, showered and headed out of town to find lunch and then a cafe to work on our computers.
When talking to my friend Sheila earlier, I had told her the closest Starbucks was 56 miles away from us. Sheila and I usually walked and stopped at Starbucks.
Earl and I thought we would drive to a Starbucks, but we decided that would be too far, so we headed to Poitiers instead, about 40 kilometers away. The sun has come out for a bit. 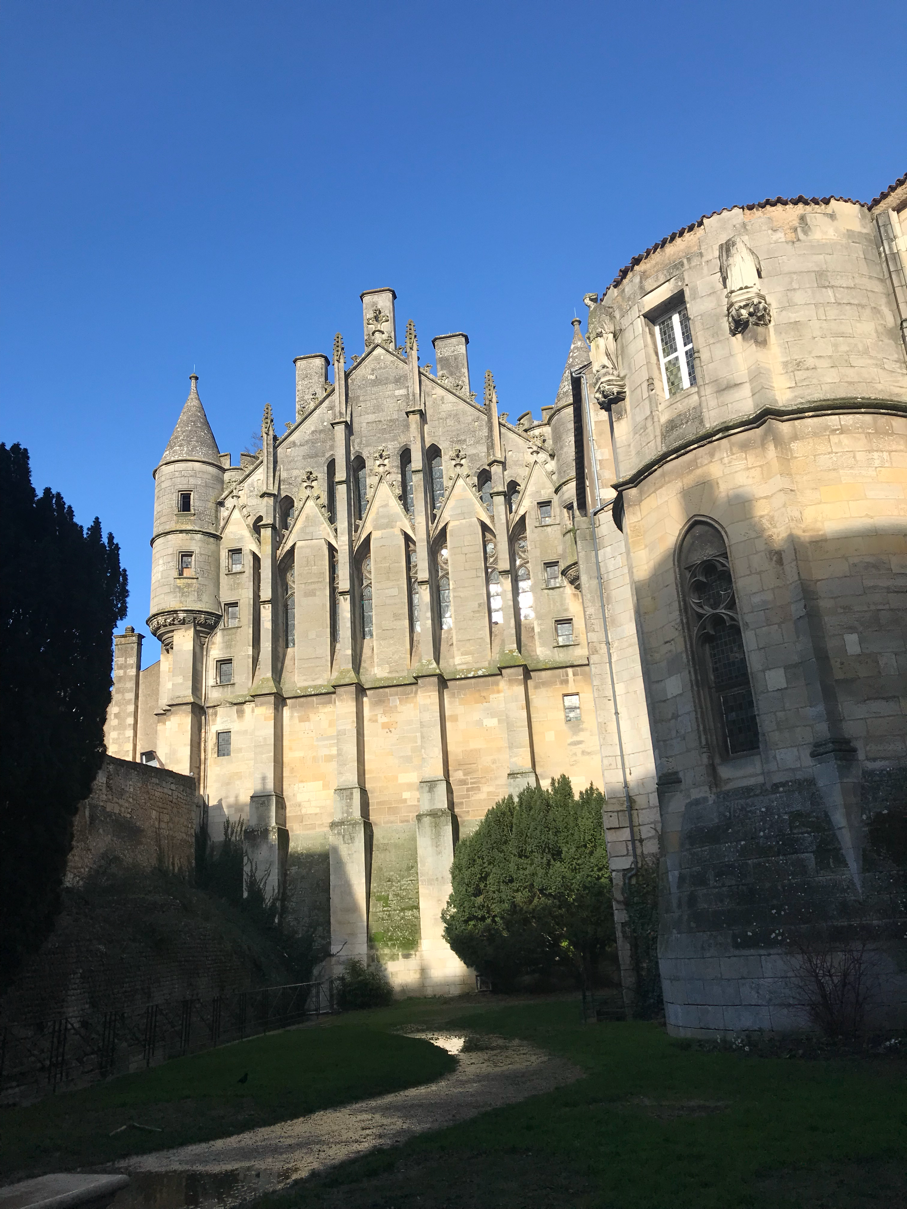 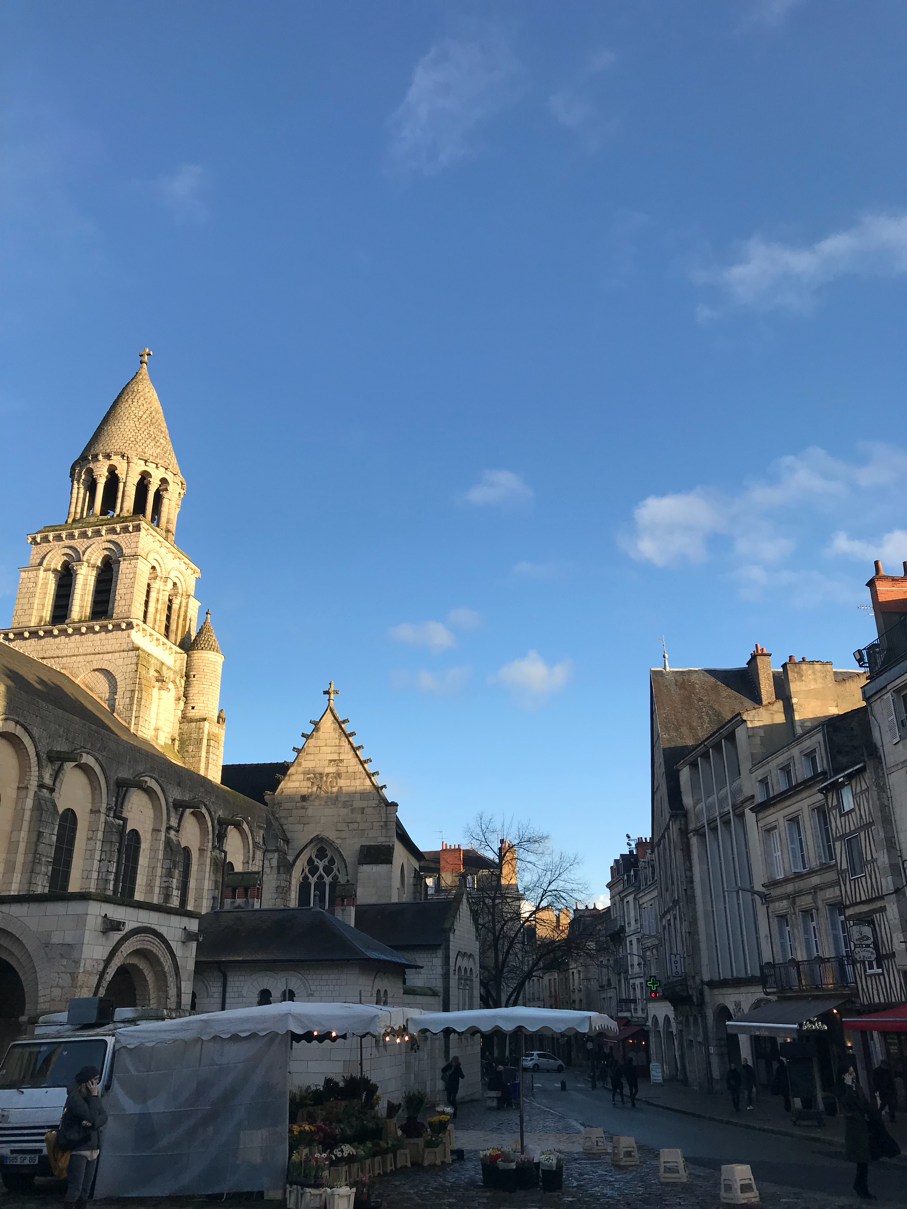 Since we hadn't eaten breakfast or lunch, we headed to a restaurant.
Most French restaurants have a "Formule midi" or "Prix fixe" menu. For this one, we paid 13.50 Euros for a starter and a main course.
I had cauliflower soup. Earl had puff pastry with chorizo sausage pieces in the middle.
My main course was a thick piece of ham in a honey sauce along with au gratin potatoes. Earl had steak and fries. 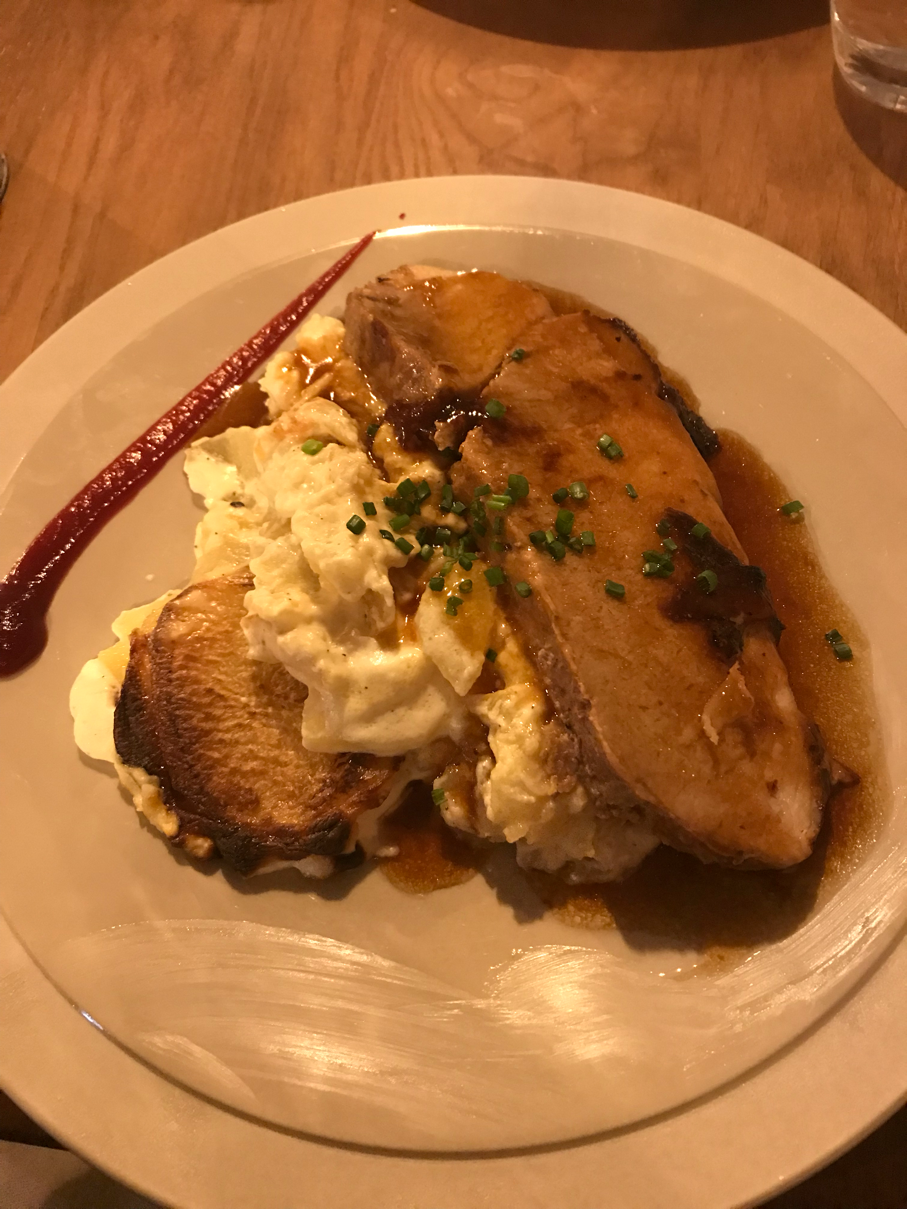 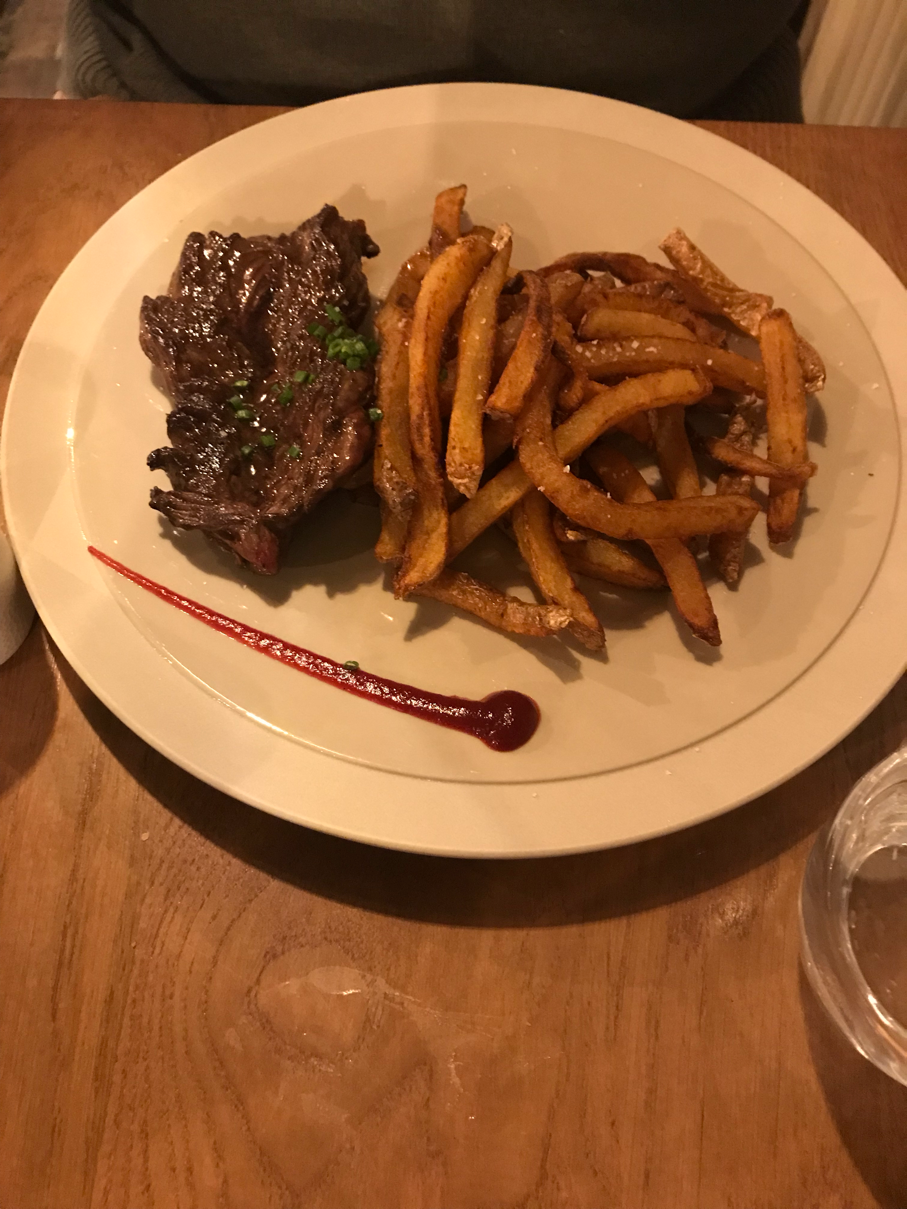 Add to that our aperitifs -- pastis for him and kir traditional for me -- and a small pitcher of wine, plus a tea at the end of the meal and a cafe goumande for me. I feel certain I would have paid $70 or more for a meal like that in the U.S. Our total bill was 43.30 Euros.

Poitiers has a large cathedral, Notre Dame where there's a market. And it has some real history, like a Roman wall next to a Medieval tower.
And this building definitely looks like it was made by middle-aged people (lol). 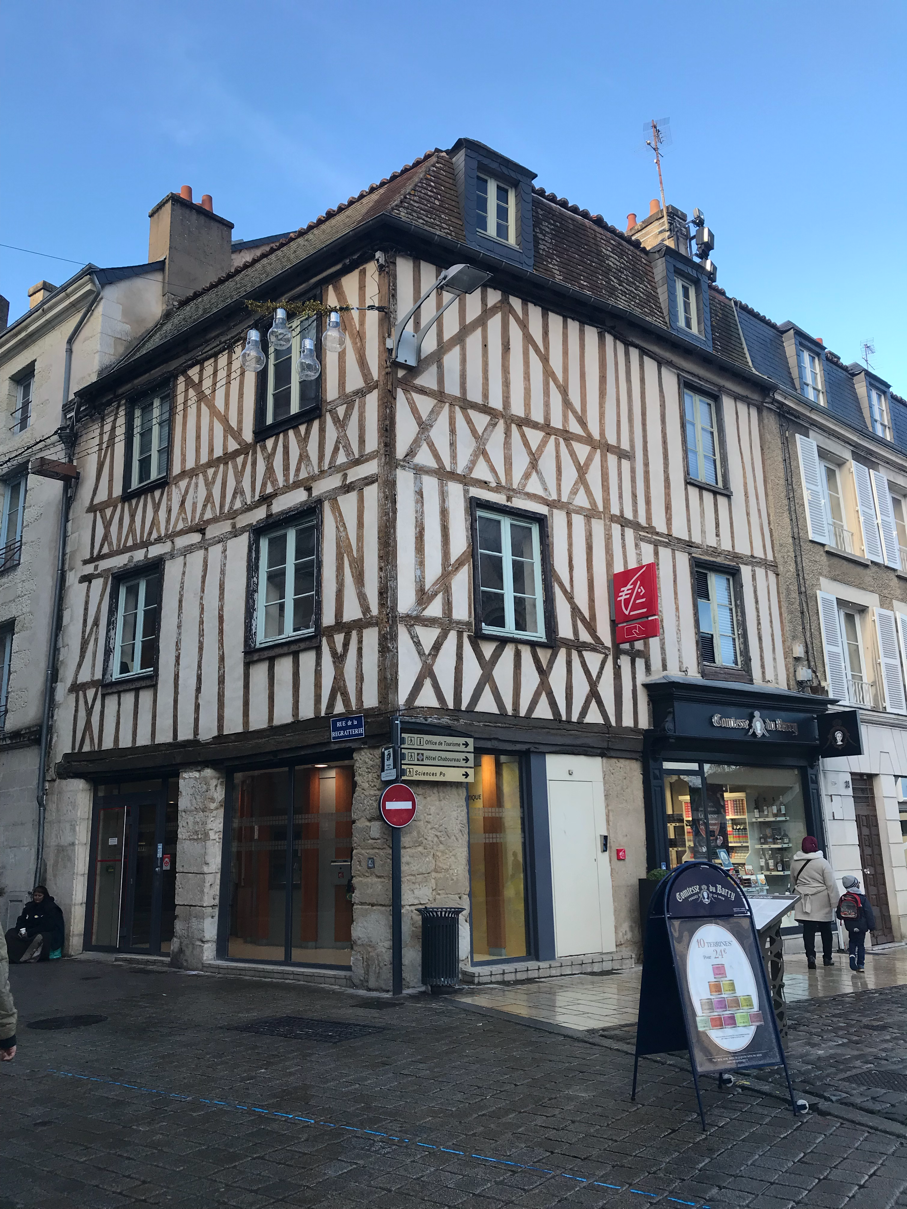 We met some friends of the owners of our home. They're British too and they came tooling along the long lane as we set out to walk the dogs. They convinced us to return to the house where we shared a bottle of wine and talked about the animals and the living conditions. They've invited us to their house for dinner, so that should be a welcome escape.
At night, it gets dark here sooner than at home. We feel a bit trapped with all the animals, doing the nightly feeding and walks. We've been watching The Crown on Netflix until bedtime. Then we put all the animals to bed and go up the staircase to the cold second floor where we climb into bed. We're sleeping later and later. I hope it's not depression because of the living conditions.
Earl is coughing more and more and I'm not sure if its allergies or will turn into bronchitis as his illnesses frequently do. We better be careful or we’ll be going full La Bohème.
Only four more days and we're headed to Aix en Provence where we hope to see the sun, I expect to get a manicure that will remove all the farm life from under my fingernails. 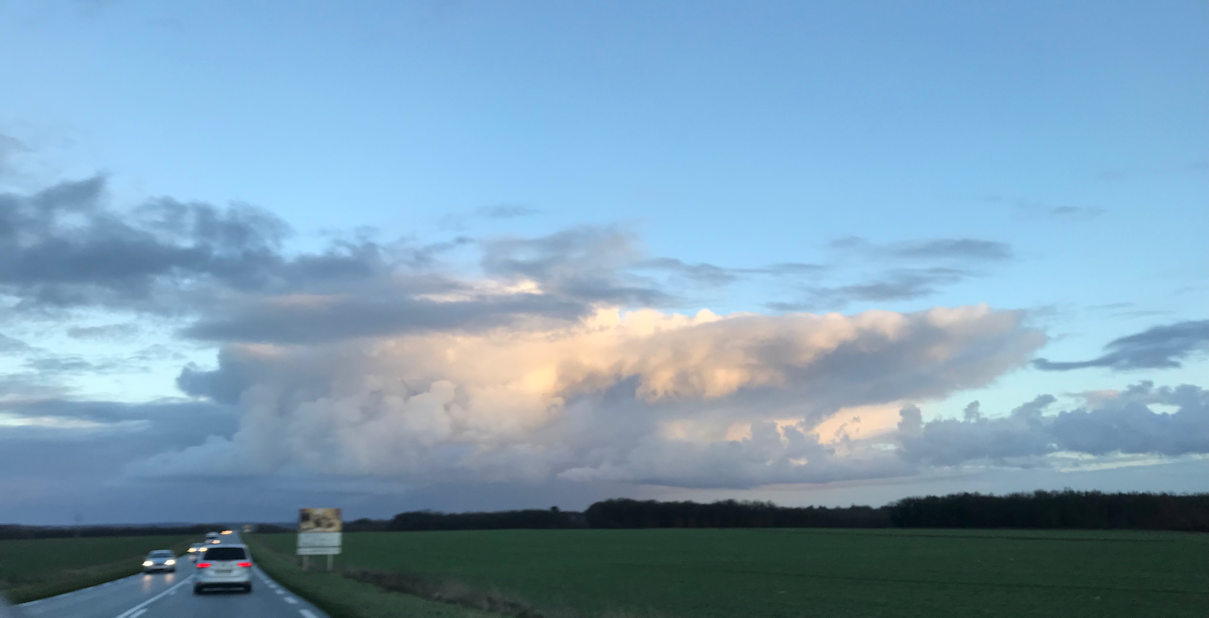 Oh my Paulita the food looks delicious and in many cases so different than items served in the U.S. You can find humor in any situation and that is a character trait I love about you. Unfortunately for us, bottled water is literally everywhere here. France has beautiful old structures, we have bottled water. Thanks for sharing your day with us.

Starbucks aren't so common, but there's another chain called Columbus Coffee that seems to be more common. There's one in Carcassonne, and some in Toulouse.
You should stay at our place in Carcassonne! No animals allowed (because we want to keep it OK for people with allergies, which I have, badly).
At least, if Earl has to go to a doctor, it won't cost an arm and a leg. The price is up to €25...that's the full price. It might be worth it anyway, because France doesn't do over-the-counter meds like the U.S. does. For antihistimines, he might need a prescription (not sure--we just go to the doctor so I haven't even tried to buy them without a prescription).

No wonder the people wanted to get away for a holiday or why ever they left! You know it's bad when even if you washed the glasses in the cupboard you don't want to drink from them. (That said, I do love that orange cat because he looks like the late, great Stimpy!)

Well, at least you are eating well. Both your meals looked just delicious! Hopefully, onward to Aix soon!

Are you going to be writing a book about your experiences? Most people who would read it would think it was fiction! And I can see the movie of it - who do you want to play you and Earl?

My goodness it sounds as if you are having a miserable start. You should have abandoned the house and headed to the coast and come and stayed with us instead. No pets in the gite and squeaky clean! Also we are having lovely weather this week, admittedly we have had more than our fair share of wind and rain, but this week is sunny, blue skies and incredibly warm, in fact so mild we ate lunch outside today. Where you are and here on the coast are like chalk and cheese, so please don't be put off the west of France altogether!

As Nora Ephron famously said, "Everything is copy." You will no doubt look back on these days with humor and fondness in time. Meanwhile, if you are watching The Crown on Netflix, you might consider setting it up with French subtitles. We've been doing the same with "Black Mirror." Very helpful for vocabulary! Hope Earl feels better soon.

I know how you feel about the dirt. We've stayed in some grotty places using AirBNB.
It will soon be over!