Blankets and Toilets and Coffee

Obviously, life in France is going to be different than life in the U.S. so I wanted to share with you a few observations of things that are not the way we would do them at home.
For starters, as I've mentioned before, homes don't have central heating with all the rooms warmed. In the house we're staying in, they have radiators in each room. The default setting for the radiators is 8 celcius, which is about 46 degrees Fahrenheit. When we are going to use a room, we turn the radiator on to 15 or 16, which is about 60 or 62 degrees.
Now in the U.S., we kept our house at 68 degree, which many people complained about, but if we moved the thermostat up in the 70s, I was too warm.
And French houses, often made of stone, hold the cold, probably works well in the summer at keeping the heat out. So in the main room with the radiators turned into the  60s, Earl builds a fire in the stove and we sit on the couch close by. 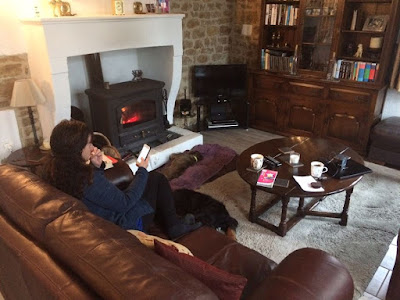 The dogs crawl on top of each other to get the heat radiating from wood stove. 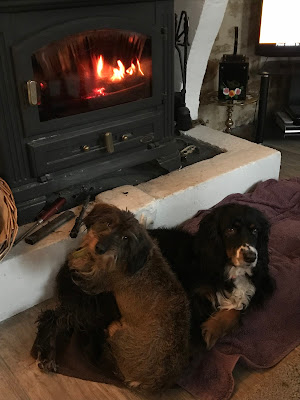 Since I've been sick, I've spent more time than I normally would on the couch near the stove, and Earl has searched in vane for a throw blanket to tuck around me.
In the U.S., doesn't everyone have a blanket draped over the back or the arm of the couch to cover up and get cozy? Apparently, it's not something that is done here. And this is where a throw blanket is definitely needed. We are staying in a British couple's home in France, so maybe it's just not a British thing.
In our old house, we had three in the living room alone and sometimes needed to get more. I guess not everyone covers up with a blanket while watching TV or reading.
So, toilets. I know I've written about French toilets before and how they all flush differently. Luckily, I haven't run into any Turkish toilets, the kinds with places for the feet to go and a drain in the middle, but what I have found several times when I've gone to the bathroom in a restaurant is a toilet without a seat. 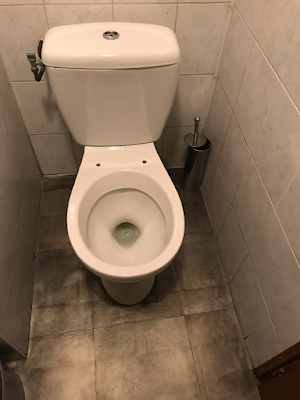 That means you need to squat to go to the bathroom. Now this would suit some of my friends (Leah) who never sit on the toilet anyway, but most women sit on the actual toilet seat to use the bathroom.
Come on! I've a very civilized country that should have decent toilets everywhere.
A final difference that I've noticed is that every place we have visited in France thus far has had Nescafe coffee makers -- they're the equivalent of the Keurig in the U.S.
One of the things we fell in love with in France was the giant bowl of coffee or tea that they drink for breakfast. Now with the Nescafe machines, the choices here are much more limited. When the homeowner showed me how to make the coffee, she pointed out the three cup choices. 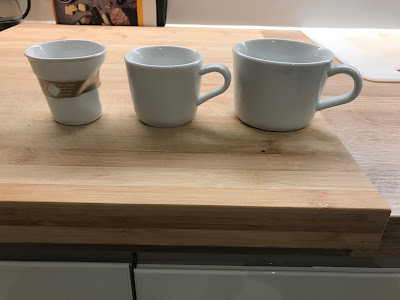 Now when I make my breakfast coffee, I make two of the largest sizes and combine them, along with some milk warmed in the microwave, and some adorable heart-shaped sugar cubes to equal a normal, American-sized mug of coffee. 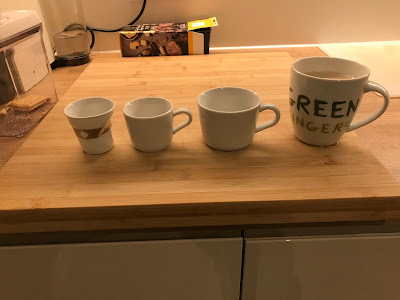 Like the Keurig at home, the Nescafe uses disposable cups, and I don't get the attraction.  It only took me a minute to put espresso in the espresso cup, add the water and let it brew. Once we have our own place, of course, I can buy an espresso maker and make as much coffee as I want for breakfast. Since I'm doubling up on the morning coffee, I have to use two of the disposable cups. Oh the shame of the extra trash.
Speaking of trash, the guy who picks up the trash knocked on our door at 8:30 this morning. He's supposed to come on Wednesdays, but because of the flood last week, he never arrived. Our trash and recycling sat outside for two days before we moved it back into the covered area.
In addition to picking up the trash and recycling, he handed over an invitation to the mayor's luncheon and a schedule of the holidays in the coming year when he wouldn't be picking up trash on the regular days. I hope I wasn't supposed to tip him or something. I just pulled out the trash and recycling bags and asked if he would be back on Wednesday, the regular day. Oui, he affirmed. Mercredi.
Obviously, France is going to have many differences from the U.S., and the differences are some of the things that attracted us. We're grateful to have a clean place to stay with well-behaved animals and a cozy fire to sit by.
When we get our own place in France though, expect throw blankets on the backs of the couches, an espresso machine with a reusable filter, and a seat on the toilet.

This is amusing--the things you get used to.
Yes, many people I know have Nespresso machines. Touted by George Clooney! There are even Nespresso cafés. You can recycle the dosage containers.
Yes, the toilet thing...my brother told me that every toilet was an adventure, figuring out how it was going to flush. Push a button? Pull up on a button? A lever? A chain? A pedal? A button on the wall?
Some restaurants have a nifty system in which the seat is encased in plastic. You push a button (separate from the flush one) and the seat turns around to slide on new plastic. Very hygenic.
FYI, we have at least a dozen throw blankets, stored in a trunk we use as a coffee table, all gifts from French and Belgian friends and relatives. And they are sold all over the place (called un plaid, pronounced pled).

I have used those hole in the floor toilets and hate them!!!
I need a toilet seat too! As for blankets, I have them in every room but to be honest, our place is so warm that we don't use them. But I've stayed in rentals whereI wish they had had them.

When you mentioned the seatless toilets I can just imagine traveling for the day with your purse and a toilet seat over your arm - thanks for the laugh that will make me smile every time I picture it in my mind!

Oh Lordy, I do not have the core strength to hover pee. I'm not surprised by the tiny coffee cups. That seems European; whereas, I need a mug larger than my child. The lack of throw blankets is astounding me, though, particularly in the winter without central heat. I have caches of throws in just about every room. I wonder why they don't have central heat. Maybe it's too hard to retroactively install that with mostly stone houses?

Not sure about it being British thing ..I have always had throws or blankets on my sofa. . And I know th sales are huge here.. must be a type of British person . My friends and I all have them.

Okay, after 9 years here, I've finally figured out the toilet thing. They don't put seats on them because they are more difficult to clean. If you think about it, it's true. More parts to clean, more bacteria. So, if it's a dingy bar, don't sit on them no matter what they offer. Otherwise, sit down, relax and enjoy. Parts is parts and a seat is just an extra (bacteria laden extra). Bonne evacuation!

To avoid having to dispose of plastic coffee doses, we bought a Senseo coffee machine, which uses sachets, a little like tea bags. Cost and taste are good. Had not visited your blog for a couple of months, but have now read all the posts that I missed. I could feel your various disappointments and recognised the emotion of your first weeks in France. I've no doubt that writing about your ups and downs is helping and I admire your total honesty. In our first week back this year, I had four trips to the doctor and five to the chemist, and that after our first plane from Sydney was cancelled for 24 hours and then set us up for a horrid 40-plus hour trip. My children did all say that it was a sign that France doesn't want me any more, and I did feel dejected for a bit, but things did turn around, as they are for you. Bonne chance.

I ways just put toilet paper on the icky base seat and sit. It's not pretty and probably not that clean but it helps. This also reminds me that maybe when I return I should carry a small bottle of antibacterial spray to clean before I sit!

Interesting about the throws. I bet it is just the people. This reminds me of going to the lake in the fall with only space heaters and a fireplace. It can cozy up but it takes awhile.

Unless those toilets are actively wet (can cure that with toilet paper) I just brace myself by my hands and then scrub the bejeebers out of them afterwards. One thing I've noticed in recent hotel stays, French hotels seem to be returning to fluffy down duvets, which I adore. There was a while there when a tightly woven, heavier than sin wool blanket would weigh you down without providing any warmth.