The Daughter of My Heart

So on Wednesday, I said goodbye to my stoic sons who loom over me, bending down to hug me, but those of you who have read my blog regularly may have noticed the absence of my daughter, Grace.
She and her boyfriend Jack got to stay a few days longer, so we didn't have to say goodbye until Friday.
This entire process of discarding our belongings and selling the house has been excruciating for Grace, who is sentimental to a fault. She wants to hold onto everything that has ever evoked a memory. For six months now, I have been pulling a band-aid off her soul bit by bit, and the last part of the band-aid was saying goodbye to us.
There had been tears for weeks, so I knew there would be copious tears on the actual day of goodbye. Grace refused to put makeup on, knowing she would only cry it off.
At the same time that she is crushed that we are leaving her, she's also thrilled for us and jealous because she would love to leave everything behind and run away to France -- in fact, she has done that before when she wasn't sure about college. 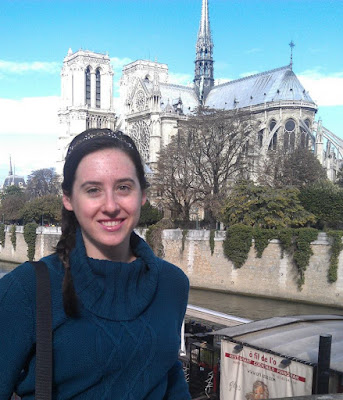 Leaving Grace behind is difficult because she's my best friend. We love hanging out together, taking walks, talking about problems, solutions and opportunities, or just laughing at silly cat antics. Our relationship isn't perfect. We still get mad at each other, but texting and Skyping can't replace the hours we spend together.
Grace has some pluses in her life right now. She has an amazing boyfriend who loves her unconditionally, which is hard to find in a 25-year-old. She just got a role she wanted in a local theater company, so rehearsals will eat up her evenings. She has a job with Actor's Theater, which puts on Shakespeare and other classical plays outdoors during the summer.
But what she doesn't have, currently, is a full-time job since she was laid off this summer. That's a scary place to be looking at bills that have to be paid, like her student loans and car loan. But even with a full-time job, this would be hard.
We're saying goodbye in Highlands County, Florida, the place we lived when Grace was born. I still remember dressing her in the yellow footie pajamas to come home from the hospital in January, but the weather was sweltering and she was probably too hot. We learned to be parents here with our patient, observant baby girl. 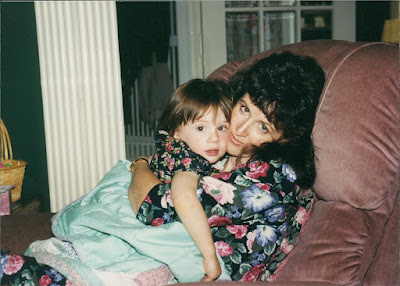 And now, we had to say goodbye until the summer at least, maybe until August since Grace is applying to grad schools and might come over before school starts.
Before I had kids, I remembered seeing a mother dragging two small children along by their hands as they both whined and complained. I thought to myself, I hope that isn't my future life. And it wasn't. I dealt with drama, but I didn't have whining. I braved temper tantrums and anxiety, but emotions were always out in the open, never curtained.
After several attempts to get off the couch to leave, interrupted by outbursts of crying, we moved to the front porch for pictures.
My family is awful at goodbyes. As Grace and I embraced and she cried,  my mom began picking up sticks around the yard. They just don't want to deal with it. 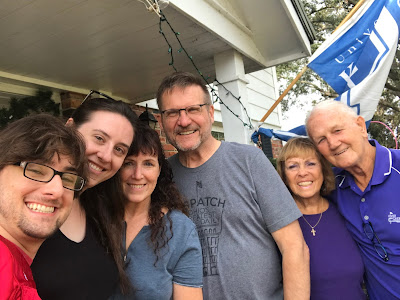 I stood on a step so I could look her straight on, and I grasped her  heart-shaped face with both hands. "You are the daughter I always wanted," I said, and her eyes, already red from crying, overflowed again. "I'll always be with you, no matter what," I promised. And that's true. Grace can hear my voice in her head, she can predict what I would say in almost any situation, and when she can't she can Facetime me or message me or Facebook message me. We won't really be far away in communication, only physically.
After this six-month goodbye, I hope that Grace can move forward without too much pain.
I compared it to caring for a loved one who is sick and then they die after a long illness. Of course there is grief and heartache because you'll miss the person, but there's a little bit of relief that the illness is over.
I think our departure will be the final tug on that band-aid, finally off, the pain can stop and planning for the future can begin.
at December 31, 2017

Sending super hugs your way -- I know that had to be a really tough farewell. Hopefully a visit will soon be in Gracie's cards!

Aaargh! This is so painful. I know you'll both be fine but putting myself in your shoes, it must be tough! Double hugs all around.